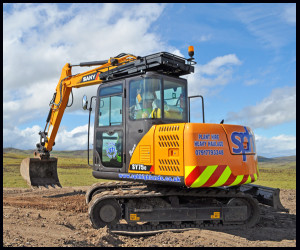 The first Sany excavator to be sold in Scotland has started work with Highland business Shaw Plant Hire.

The Sutherland-based hire and heavy haulage firm opted for the 7.5t SY75c, the smallest in the Chinese manufacturer’s excavator range, in the landmark sale by UK distributor TDL Equipment. The deal was made at last month’s Black Isle Show.

The mono boom machine, which has an Isuzu four-cylinder engine and Kawasaki hydraulics, was described as “the perfect choice” for Shaw which wanted a combination of stability and power to work in tough and often boggy conditions. Its first job was to help build access roads on a large substation and hydro project at Bonar Bridge, 40 miles north of Inverness, working for BAM Construct UK.

Mark Shaw, who founded the business five years ago, said he was “already more than impressed” with the new arrival. “It really is a powerful machine and very smooth to operate.”

Based at Ardgay, Shaw Plant Hire runs a fleet of midi excavators and heavy haulage equipment to service contracting and hire projects and has recently expanded to respond to an increase in large infrastructure projects in the area.