Montracon’s ground-breaking work in the area of load safety has been widely reported in the trade press recently, following formal approval of the design concept.

The side netting and strapping system that operates on the range of double deck curtainsiders was designed by Montracon at the request of a number of it’s trading partners, mainly the pallet networks, and following the publication of a series of guidelines for load securing on double deck trailers, by the DVSA and the RHA. 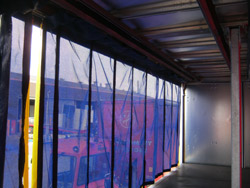 The system incorporated side nets on the top deck, that assist in pallet security and help prevent loose items falling from the deck, and it allows the driver to open the nets and straps from ground level, thus preventing any working at height issues.

The system, which can be retro-fitted to older trailers, as well as new, has generated a huge amount of interest, and has already stimulated a growing number of orders for Montracon.