Safety was at the top of its agenda when the Wembley-based Carey Group ordered its first seven Mercedes-Benz trucks. The 8×4 Arocs 3240s were supplied by Dealer Intercounty Truck & Van.

A multi-disciplined provider of construction and resource management services operating throughout the UK and Ireland, the Carey Group has held Gold standard acceditation from the Freight Operator Recognition Scheme (FORS) since 2013. 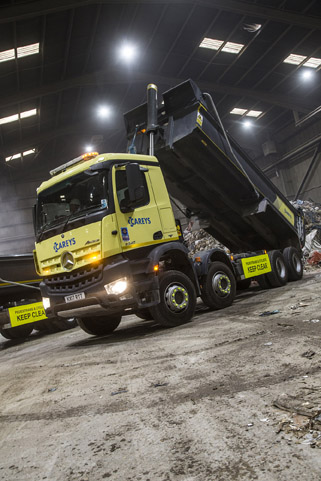 Key to the company’s decision to commission the new eight-wheelers were the strong relationship it has already forged with Stephen James, Intercounty’s Fleet Sales Director – Truck, and the promise of timely, customer-focused back-up. The Arocs are now being inspected and serviced by the Dealer under Mercedes-Benz Repair and Maintenance Contracts.

The trucks have ClassicSpace M-Cabs and are powered by fuel-efficient, 10.7-litre straight-six engines, which produce 290 kW (394 hp) and drive through smooth and efficient Mercedes PowerShift 3 automated transmissions. Their bodywork is by Abba Commercials, of St Helens – five are steel tippers and assigned to general site muckaway duties, while the remaining two are hook-loaders which carry bins with capacities of up to 12 cubic yards.

Established in 1969, the Carey Group now has a turnover of more than £400 million. The company’s portfolio of services includes asbestos removal, demolition, civil engineering, dry lining and house building, as well as resource management. The Arocs are being operated by its PJ Carey Plant Hire (Oval) division, which runs 30 trucks, ranging from 7.5 tonners to 80-tonne tractor units for special movements, that work in and around the capital.

Greater Safety is one of the three pillars of Mercedes-Benz Trucks’ RoadEfficiency Strategy. PJ Carey Plant & Fleet Director Gary Condon confirmed: “Intercounty have worked closely with ourselves and with the bodybuilder to develop a specification that reflects our commitment to the protection of vulnerable road users. It’s been very much a three-way partnership.

“We’ve done a lot of work on behavioural driving and this has confirmed that comfort is an important component when it comes to safety. The ergonomics of the Arocs cab are very good, while these are also our first tippers with auto transmissions – unlike a traditional manual ’box, Mercedes PowerShift lets the truck do the work and leaves the driver free to concentrate fully on what’s going on around him.” 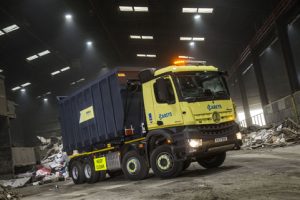 Replacements for French-built vehicles, the Arocs are equipped with a full complement of recordable cameras supplied and fitted by Exeros Technologies. These provide 360-degree coverage around the vehicle, with others facing the driver and looking down on the load – a web portal allows Mr Condon and his colleagues to log in and monitor the status of the trucks in real time.

Other safety features include proximity side sensors which issue flashing visual as well as audible warnings, and side protection between the two sets of axles, to prevent cyclists being dragged under the wheels. The Arocs are also fitted with truck-specific satellite navigation systems.

Maximised Use is another RoadEfficiency pillar and Mr Condon continued: “We’ll be monitoring the Arocs closely because with the Dealer’s support we’re certainly hoping to achieve increased utilisation compared to our established vehicles.” 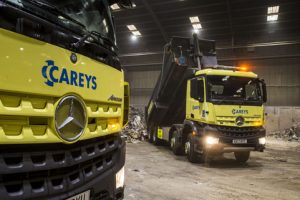 Intercounty has also delivered a programme of driver familiarisation at the point of delivery, and subsequent training. Mr Condon added: “We’ve done everything we can to make these trucks as safe and efficient as possible. We knew what we wanted but the Dealer has certainly helped to deliver it – Stephen, in particular, has been proactive but never to the point of painfully pestering.

“We’re still very new to Mercedes-Benz, of course, but if the product proves as good as the relationship we’ve already developed with Intercounty then there’s every prospect that we’ll be returning for more.”