Marcus Kemp, Key accounts Manager at HTC, Travelled up to the Outer Hebrides with his wife to hand over a new DAF CF. Here he tells us about his experience:

A vehicle sale isn’t complete until you have delivered the truck and demonstrated all the new features. So when DAF and HTC were nominated to supply new trucks to Grafton Merchanting (including Buildbase) for the first time in a number of years, it was only appropriate to do likewise. As the orders started rolling in, all regular names you would expect started rolling in – Manchester, Milton Keynes and then a place called Stornoway. So after a search on the internet, a small town in the Outer Hebrides was located. Another search revealed it was over 600 miles from HTC Oxford where the PDI’s were being completed, close to Grafton’s HQ which is also in Oxford. After initial scepticism that you could actually travel 600 miles in the UK from Oxford, a plan was hatched. Arrange a delivery company to do the heavy mileage, but to save duplication costs, the picturesque journey across the highlands needed to be handled by the dedicated Salesman! 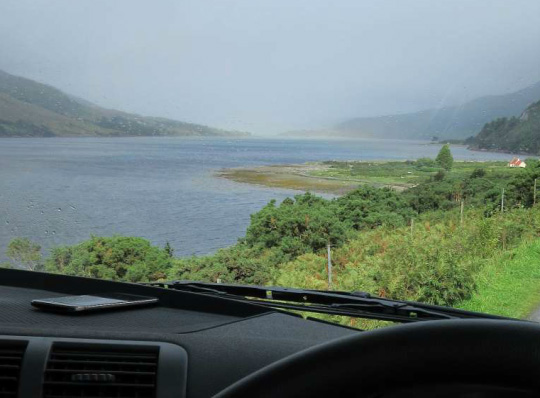 Plan A – a two day journey for the truck to Norscot DAF in Inverness, and myself and my wife (I needed a navigator after all) would fly up and drive across the top of Scotland to Ullapool, not the sort of place you would pass through, for the 2 and a half hour ferry crossing. With very clever planning, it was decided that a Saturday morning handover would suit everyone best, and I could extend this work’s trip to a weekend getaway. Ferry booked, hotel booked, and return flights via Glasgow back to Birmingham also booked.

So, at 5:30am on Friday the 12th August, the experience began… (after seeing the truck away from Oxford on the 10th). As luck would have it, the flight to Inverness was on a beautiful day with Great views across the Scottish Highlands. After a short taxi ride to the dealer, there was the truck ready for the last leg of the journey. Being a regular traveller on the stop start rat runs on the M40 and A34, the remoteA835 turned out to be far more pleasurable… These drivers up in Scotland do have it easy… With some cloud and showers blowing in, we even managed to see rainbows on the road over the picturesque Loch Glascarnoch.

Next stop, the beautiful little village of Ullapool and the ferry for Stornoway, afternoon tea on the harbour front, a 10 minute tour of the village and a short wait for the twice daily ferry. As the ferry pulled away from the Scottish mainland, the views back across the Highlands of Scotland were beautiful, but unfortunately that was the last we would see of blue sky as rain was waiting for us. It was only 8pm when we arrived in Stornoway, but the rain and cloud had taken control and as the ferry door opened, the beautiful summer’s day was a distant memory. The journey to the hotel was all of 5 minutes, despite having to drive around the roundabout twice to find the right exit! Luckily we found a spare coach slot so the journey was complete. The final leg to the Buildbase branch, all of a 2 minute drive could wait until the morning. 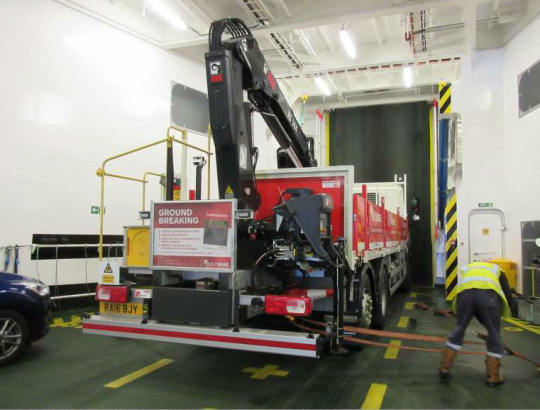 After a fresh, early morning walk around the town, was the journey to the branch and the completion of an enjoyable experience. The branch was a little smaller than you might find in most of our cities and as I pulled up, the branch staff were still negotiating parking space in the wee terraced street (added a little Scottish language there!).

As it turned out the regular driver wasn’t available on that Saturday, so after introductions and a brief tour around the latest state-of-the-art Euro 6 truck, the vehicle was parked up for a Monday morning handover… Luckily I had booked hotel rooms for the weekend and my tour of one of the most remote parts of our island could begin. Anybody that follows the news may have seen the little island was headline news… An offshore drilling rig had come adrift and run aground on one of the beautiful beaches. The police had set up an exclusion zone around the area so that part of the tour was off-limits.

After an exhausting weekend checking out the terrain to ensure suitability for the new truck, and a little local liquid refreshment, it was time to hand the vehicle over. For the record, Lewis and Harris don’t have a whisky but they do have a pleasant Harris gin! Lewis and Harris being one Island, Harris in the south and very hilly, Lewis being much flatter.

I think this was the first new truck they had had in many a year (they didn’t have the 06 from new) and on Monday morning, they were very keen and early for the handover.

The vehicle chosen was a CF310 FAN with a PX engine, SB Components, dropside body with a Hiab rear mounted crane. Initial thoughts were that the truck was rather large for the Island, but from my local research, the main road North to South on the Island was far better that some of the roads you find in rural Oxfordshire. The rear steer on the FAN was not new to them, but was a must on some of the smaller winding roads at the back of the Island. Adblue wasn’t new to them, they had read about it in a book! They were very impressed with the lane departure warning and adaptive cruise control (we hadn’t specified predictive!), which may not have been a feature they would have considered. Grafton’s very sensibly have a pan UK specification, so they can move vehicles around as business demands. 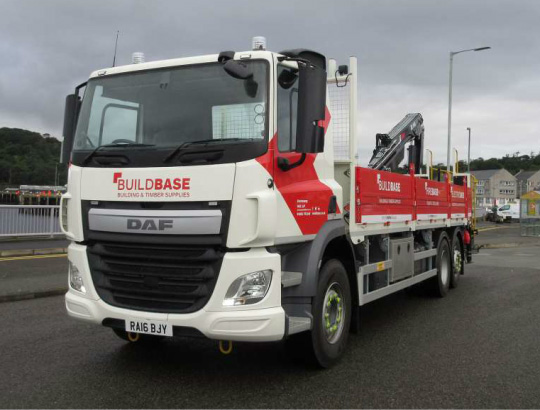 It was the first time they had experienced the AStronic gearbox, and once they understood how best to drive the vehicle, especially with the hill start aid, they were very pleased. A short drive around Stronoway put theory into practice and any concerns were long gone. Regeneration was explained and with fair wind shouldn’t be a problem as they do a twice weekly trip down to Harris (I did explain the difference earlier!), giving the system a chance to clean itself.

Final instruction covered the additional safety systems that had been installed with DAF engineering help – secondary speed limiter linked to incorrect or non-stowage of landing legs for example. We had left the 5 minute cut out installed, returned to 12 minutes, so brief non-activity of the crane didn’t mean the engine wouldn’t cut out. So after an enjoyable couple of hours with drivers that appreciated the time and opportunity to check out the new technology, it was time to start the journey home…
For those of you used to international jet-setting, Stornoway International airport check-in commences ¾ hour before departure, and the lady selling refreshments in the main concourse, was also the same lady selling refreshments in departure. Again we were blessed with beautiful skies and a wonderful view of Sky, Ben Nevis in the small twin propeller engine plane. Then back to reality in Glasgow, lots of people rushing around and a mobile phone signal again. Best start planning the next handover… I do recall Shetland is next on the list…

In reality, Corby, Ayelsbury and Sandy were next, and to be fair, these drivers were just as appreciative of their handover!