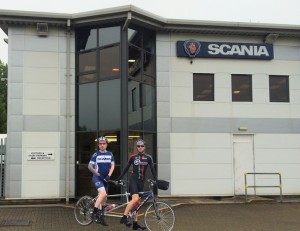 At Telford depot, our very own Kirk Raftery-Ticket underwent a grueling 58 mile charity bike ride on 20th June in aid of 42 year old Louisa. A mother of 2, Louisa has beaten cancer twice already, but it has now come back in the form of metastatic brain cancer. Sadly Louisa’s illness is terminal and Kirk wants to raise money to send Louisa and her two children Cian and Holly on a once in a life time holiday #fundraisingforlou

Kirk suffers from a chronic illness called Behçet’s disease following two strokes, and is taking part in the charity bike ride on a tandem with a friend of his on a course designed by a triathlon.

Behçet’s disease is a rare condition in which blood vessels and tissues may become inflamed and the immune system mistakenly attacks these healthy tissues and blood vessels, so a big shout out to Kirk, even after disregarding advice to stop, he continued right to the end and finished the 58 mile ride in 4 hours. A massive well done Kirk and great news on raising £400.